Four years ago this May, I anxiously walked into the Coleman Morse Center, following “Mr. Warner” (who quickly told me to call him “Steve”) and his guitar. Though a violinist by trade, I was here auditioning with my voice. It was time for my first ever choral audition, and to say I was terrified would have been an understatement. After stumbling through some hymns and botching a few sight-reading exercises (especially that darn third in “Song of Ruth”!), Steve and I sat down to talk. 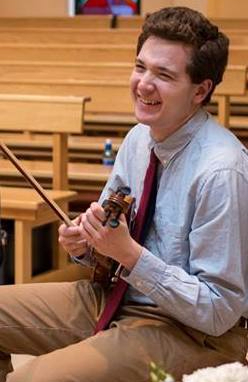 “Why Folk Choir?” he asked me. “There are so many ensembles on this campus you could join. Why us?” I remember smiling as I recalled the many years of listening to Folk Choir CDs, attending Basilica Masses, learning to play Folk Choir songs on my violin as an elementary school student, and cultivating my own spirituality around the music ministry of this group.

“It was never a question for me, coming to Notre Dame, what group I would join. I can’t imagine going to this school and not somehow being involved in this ministry,” I told him. Apparently it was a good enough answer, because that evening I received a formal invitation to join the choir for the 2014-2015 academic year, along with an extended invitation to work with the summer Folk Choir beginning the following month.

I was promptly introduced to the most zany, talented, loving, and patient friends one could have. My first year was full of beautiful moments. Following the naming tradition of my tenor forefathers, I was given my Tenor Name, “Poised to Destroy." Over Christmas break, I was fortunate enough to visit Gethsemani Abbey and perform with the choir in the arrestingly beautiful Abbey Church. The inimitable Karen Kirner began instructing me in composition. The many hugs, dining hall dates, Sunday brunches, and quiet moments of shared prayer sustained me through good and bad. Though many questions lingered as I returned home for the summer, one constant remained—my passion for this ministry, this music, and these people. My sophomore and junior years (during which I transitioned to be the full time Violin I of the group) only deepened my feelings for this community. I was honored to be elected president of this fine group during a year of transition. After saying a bittersweet farewell to Steve and his beloved Michele, and working with Karen to strengthen and solidify the ensemble, we welcomed JJ Wright as our new director.

Walking into our first officers’ meeting this year, my mind returned to that uncertain audition four years ago: Would this work? In short: absolutely. Working with JJ was a fruitful and reflective experience for me as a graduating senior. His interest in the Folk Choir’s traditions called upon my institutional memory and gave me the chance to reflect upon and appreciate how much this ensemble has achieved in its nearly 40-year lifetime. It challenged me to really remember: Why Folk Choir? What made us, “us?” Who was this group, and how could I preserve its legacy while encouraging its growth and development? Through this process, we have been able to chart a course for the choir’s future while celebrating its past, and establishing a firm base upon which the next generation of Folkheads can build.

I never hesitate to say that the Folk Choir is my family. It was here I found a home during my undergraduate career. At the most difficult times in my life, it was the Folk Choir who gave me the support needed to persevere. I cannot recall a single moment when I felt rejected by my fellow Folkheads. This group taught me the importance of selfless love and the beautiful power of sacrifice—that sacred mystery in which one is filled in giving one’s all. As I take my leave of this place, I am thankful for the many opportunities granted me by so many in this group, and excited to see how much more they will accomplish in the years to come.