At Notre Dame, everyone is smart and talented, so much so that the environment can be more than a little intimidating. As the story for many probably goes, I went from being the super-smart kid in high school to being an average student at Notre Dame. It is certainly a different way to go through life. For a while, I was not really sure how to handle this new environment; I felt intellectually intimidated by my super-smart classmates who tested into Calculus III,  got perfect ACT scores, and had semi-photographic memories. I didn’t feel very smart, which made me sad, because there is so much pressure to make a good impression. Nobody wants to be the student that makes other students ask “Why is that guy here? He’s stupid.” I felt like that guy, until halfway through my freshmen year. 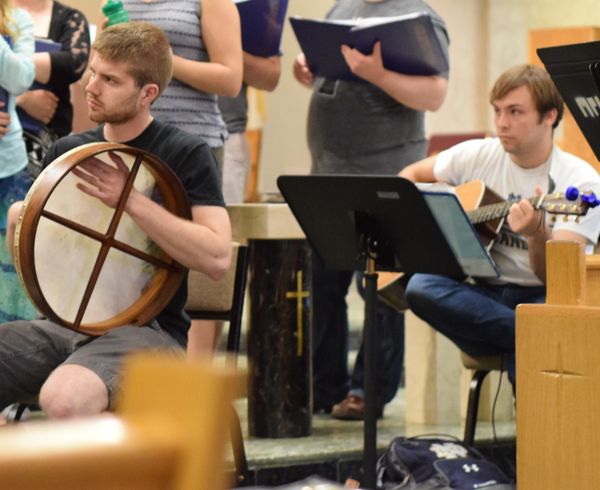 Andrew Skiff on bodhrán and Nick Munsen on guitar

Nick Munsen was a Theology and PLS double major, as well as a percussionist in the Folk Choir. One day, I was hanging out in Lafortune Student Center and he came up and said hi. We started talking, and I don’t remember how it came up, but at one point, he said, “You’d be good at theology; you’re really smart.” What? Me, smart? No one here had ever told me that, but it’s what I had wanted to prove ever since I had arrived on campus in the fall. I got a little emotional and told Nick that sometimes I just don’t feel that smart. He said that he was the same way freshman year, that he was really intimidated by the intelligence of some of the guys in his philosophy class. Nick lifted my spirit with something as “insignificant” as a short phrase. I realized, then, the importance of friends.

This story makes me think of both family and hope. Nick’s kind statements to me certainly helped me to cope with the new, complex, challenging environment that college here at Notre Dame has thrown at me. He made me see that I have a place here; I’m not just an average student, but someone that has gifts and perspectives nobody else does. Nick also helped me to think positively about my future courses and major because he showed me that being a student in the College of Arts and Letters doesn’t make me less important than a student in Engineering or Science. As a result of my relationship with Nick, I received a message of hope that has helped to strengthen my self-image.

The video “The Time You Have” uses jelly beans to argue that people may not have as much time to live as they think they do. It begs the question: what will you do with the time you have left? After realizing that friends are incredibly important, and that I can be respectable without being an engineer or scientist, I discovered what I want to do with that time I have left. I want to make music: perform it and compose it. I want to make people happy with my music. Since I probably don’t have as much time as I think I do to make a difference in this world, I might as well spend it making life better for others.

With this in mind, I intend to dedicate more time to practicing percussion and composing chorales. I intend to cherish my friendships. I intend to use my time on earth wisely, so that I can bring hope to the rest of my earthly family.